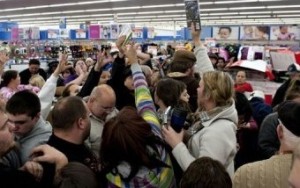 Not only were people buying towels at Walmart, the Wall Street Journal’s Tom Gara found that customers were turning violent to buy inexpensive ones. He gathered the following tweets about a specific incident in West Memphis, Ark.:

In other news.. There was a fight at the West Memphis Walmart on the towel aisle #hometownpride

I will never go Black Friday shopping again. This trashy girl tried to fight me in Walmart over a towel. Who does that?