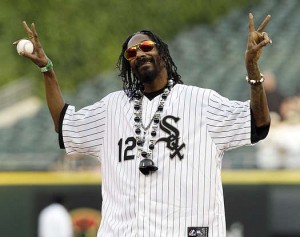 Snoop Dogg‘s son, Cordell Broadus, is one of the top dogs in high-school football, and if everything goes to plan he could be headed to a top university after he graduates in 2015. Although he just finished his freshman year at Diamond Bar High School, Broadus has received a scholarship offer to play football at UCLA.

According to ESPN, the 6-foot-2, 185-pound wide receiver/defensive back has the potential to become a Division I prospect, so UCLA coach Jim Mora Jr. is getting an early jump on the young man.

Snoop Dogg, who is coaching his own youth football team, is proud of his son’s accomplishment.

Of course, Broadus isn’t the first son of a rapper to score a scholarship to UCLA. Diddy‘s son Justin Combs will play for the UCLA Bruins this fall. Combs is expected to play at defensive back, so there’s a possibility that both Diddy and Snoop Dogg’s sons could be playing in the same defensive backfield in fall 2015.

Broadus and Combs’ good fortune also comes with some controversy. While it’s great that both men have received athletic scholarships to play football, both of their families are financially able to pay the school’s expensive tuition. Critics argue that those scholarships should be awarded to underprivileged students who also excelled academically and athletically but can’t afford to go to such a prestigious school.