RIHANNA’S 777 DOCUMENTARY WILL AIR MAY 6TH ON FOX 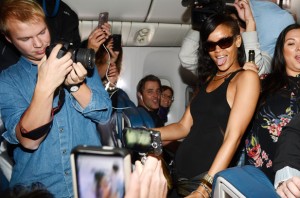 The superstar is set to take viewers on a whirlwind trip around the world when her one-hour concert documentary, Rihanna 777, airs May 6 (Fox, 8 p.m. ET/PT).
The tour traveled to seven countries in seven days with seven shows to promote her seventh album. Get it?
Beginning Nov. 14, 2012, the superstar visited Mexico City, Toronto, Stockholm, Paris, Berlin, London and New York to promote her album Unapologetic.
The album made its debut at No.1 on Billboard‘s album chart, with single Diamonds reaching No. 1 on the Billboard Hot 100 the day after the 777 tour ended.
The special offers a behind-the-scenes look at the ambitious tour, from the sound of popping champagne corks during the flight to the singer’s worldwide appearances. The backstage chaos also will be covered.