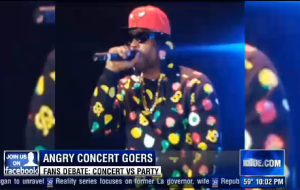 R&B musician R. Kelly has angered fans after allegedly sending an impersonator to perform in his place at a concert in Louisiana this weekend – or at least that’s what the promoters say.

While the news reports say an impersonator came in place of R. Kelly, I’ve talked to a few radio DJ’s that I know in the city who say it was in fact R. Kelly. Turns out Kellz was paid for a walk through, NOT a concert or performance. He was simply paid to show up and party for 15-20 minutes. Also, the promoter says it wasn’t him who contacted the news station. The statement about him being duped and giving refunds is false.