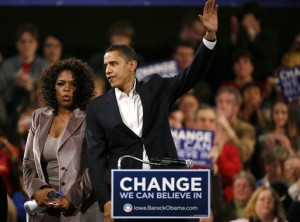 Oprah Winfrey sat down with BBC’s Will Gompertz and detailed how no one is above the racism that still exists in this world today … not even the President of the United States, Barack Obama.
“There’s a level of disrespect for the office that occurs in some cases and maybe even many cases because he’s African American,” she said, according to The New York Daily News. “There’s no question about that. And it’s the kind of thing no one ever says, but everybody’s thinking it.”