NICKI MINAJ: NEXT SINGLE WILL BE ‘POUND THE ALARM’ 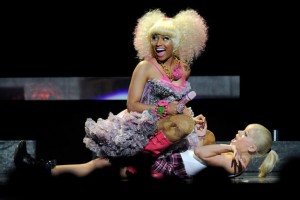 Nicki Minaj has found a way to get your summer started off on the right foot, and it’s all thanks to you!

After asking fans to vote on what her next single should be, the rapper announced that she will be releasing ‘Pound the Alarm’ as her second single off of her album ‘Pink Friday: Roman Reloaded.’ The single is set to hit airwaves in two weeks, and a music video will be accompanying the single.

This probably comes as a relief to fans who had hoped to hear the star perform the song at Summer Jam. Nicki was pulled from the lineup by her boss Lil Wayne after Hot 97 announcer Peter Rosenberg blasted her song ‘Starships,’ calling it “not real hip hop.” And to make matters worse, even though she spoke about the Hot 97 incident, she reportedly won’t play Summer Jam 2013 either.

Fans will just have to settle for hearing ‘Pound the Alarm’ on the radio and their iPods, unless they decide to catch her on her Pink Friday tour.