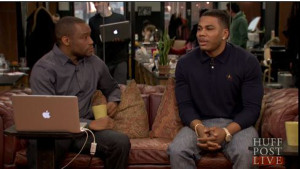 In an interview on HuffPost Live, rapper/actor Nelly told host Marc Lamont Hill that he still has ill feelings toward the Spelman College protestors who boycotted his 2004 bone marrow drive in protest to his sexually charged “Tip Drill” video.
The drive was planned in hopes of helping his sister, Jackie Donahue, find a match. Unfortunately no match was ever found and Jackie succumbed to leukemia in 2005.
Although it’s been a little more than 8 years since the ordeal, Nelly made it clear that he still feels angry. When asked what he would’ve done differently Nelly had this to say “The Spelman thing, the only thing I feel I would’ve done differently is kick somebody’s ass. That’s just how it felt to me, Pimp,” he told Hill. “I don’t have my sister and I doubt it if half of those girls are still campaigning for what they quote, unquote took advantage of that opportunity for.”
“You [protesters] robbed me of a opportunity. Unfairly, my brother. Because we could’ve still had your conversation after I got my opportunity. It could’ve been somebody that was coming to that bone marrow drive that day, that was possibly a match for my sister. That didn’t come because of that.”