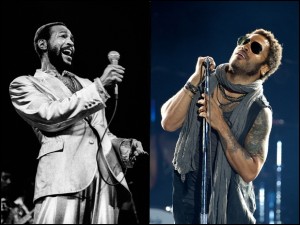 From TMZ, “Marvin Gaye‘s son wants his childhood friend Lenny Kravitz to walk away from the role of a lifetime — playing the Motown legend in an upcoming biopic — and says he’s shocked Lenny signed on for a project he calls “shameful.”

Kravitz will play Gaye in “Sexual Healing” (working title) — which reportedly focuses on Marvin’s life in the 80s when he battled drug abuse and depression … before his father shot and killed him in 1984.

Marvin Gaye III tells TMZ, “The producers and directors of this film are very wrong and shameful … [They’re] trying to do a film about a low period in his life. They don’t even know the whole story.”
Marvin’s son says he and Kravitz were schoolmates — and remain friends to this day — so he wants to “talk to him about why he would do this.”

Marvin Jr. tells us he and other family members are meeting with lawyers to try to stop production — and added, “I would hope [Lenny] doesn’t have any idea that we are against this film being done.”