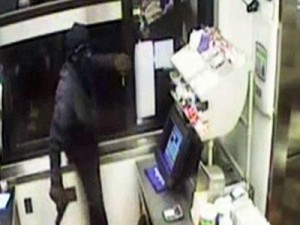 Police in Bedford County, VA are looking for a man who crawled through a drive-thru window in an unsuccessful attempt to rob a fast-food restaurant.

Gardner says the man fled after he was told the store’s money had already been locked up for the night.

Media outlets report the man’s face was covered by a T-shirt and sunglasses.