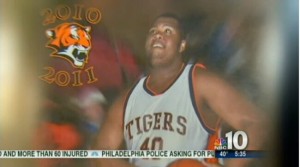 Christian Massey, 21, was gunned down in an alley over his pair of popular “Beats By Dre” headphones. The young man had just bought them with his hard earned money on Black Friday and in a twinkling of an eye, he lost his life when he refused to give them up. To make matters even more disturbing, he was gunned down in front of a group of children!

The sounds of children playing on a Lebanon Avenue sidewalk  Saturday afternoon didn’t curb a shooter. An armed man opened fire on Christian Massey, 21, in a nearby alley. The armed man first  demanded Massey’s Dr. Dre Beats headphones. Massey did not comply and tried to run, witnesses say. The suspect shot five rounds, striking and killing Massey. The headphones lay near Massey’s lifeless body. He had purchased them for about $300 on Black Friday.“To me, he was my child,” said Eula Hodge, his grandmother. “Why did they have  to shoot him. They didn’t get what they shot him for so he was shot for nothing.” His goal was to play basketball and buy a house for himself and his sisters. Philadelphia Police have no leads and are seeking the public’s help with identifying a suspect.