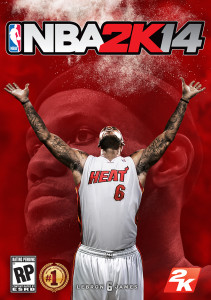 The Miami Heat star was recently chosen to curate the tunes for the basketball video game.  Among the songs confirmed so far are Drake’s “Started From the Bottom,” Macklemore & Ryan Lewis’ “Can’t Hold Us” and Daft Punk’s “Get Lucky” featuring Pharrell Williams.  James also selected tracks by Kanye West, Rick Ross, Kendrick Lamar, Nas and Eminem.  He also included his friend Jay Z, who served as executive producer on soundtrack to last year’s installment of the game.

Meantime, in a statement on NBA.com, LeBron says he loves that he’s “the first NBA 2K cover athlete to choose the soundtrack.”  The game is expected to go on sale October 1st.