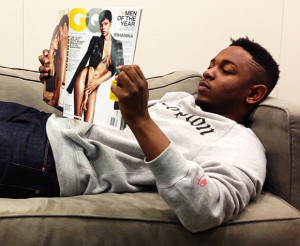 GQ Magazine has released their Man of the Year issue, and in the issue, Kendrick Lamar was named Rapper of the Year. As part of this title, the magazine did a feature interview with Kendrick. The interview takes place during a chaotic time for Kendrick, as he bumps into Drake at the MTV Video Music Awards after his “Control” verse had stirred up tension between the two, participates in Fashion Week events, and attends the funeral services of his close friend, Chad Keaton.
Following his run-in with Drake at the VMAs, Kendrick is asked if the two are cool now. He said that they’re “Pretty cool,” but added: “I mean, I would be okay if we weren’t.” In the following weeks, Drake would begin to give interviews indicating that he had felt offended by Kendrick’s verse, and Kendrick would go on to respond with his verse at the BET Cypher. In the interview, Kendrick acknowledged that Drake had taken his verse to be a diss, and added that Drake wasn’t a creative influence or role model. “If anything. We all peers.”
Following the VMAs, Kendrick and his team attended Diddy’s afterparty, a party where J. Cole and Diddy reportedly got into a confrontation over Kendrick’s “Control” verse. While neither Kendrick nor his team would acknowledge the incident, Kendrick did explain his decision to go to the afterparty prior to attending the event, saying, “I only go when there’s a point. Usually the point is just niggas drinking. But walking through the club the week after I released the ‘Control’ verse? That’s a point!”