You know the old saying: “What happens in Vegas, stays in Vegas.” Well, Kelly Rowland is on the cover of Vegas magazine’s Summer 2012 issue … and I’m telling everybody! The magazine is celebrating its 9th anniversary in publication and they are going to celebrate with a party featuring a performance from Rowland.

The 31-year-old songbird is no stranger to Sin City, having performed there for the first time at the age of 18 with Destiny’s Child in July 1999. Rowland’s most recent performance was at the MGM Grand for Muhammad Ali’s 70th birthday celebration. Now she returns this summer looking glamorous as ever for Vegas magazine.

On the cover, the singer posed in a sparkling black-and-gold mini-dress, showing off her long chocolatey legs and holding the number 9 (she’s a 10 in my book!). Inside her fashion spread, K. Row is wearing a lovely red gown with lavender heels. In another photo, Rowland dazzles in a lavender dress and silver-colored pumps. Finally, Rowland is looking chic in her skintight all-blue tuxedo jacket and pants, which was designed by Tom Ford.

In her interview with Vegas magazine, Rowland reveals that she’s just begun recording her follow-up to her 2011 album ‘Here I Am.’ “I am more excited going into it this time than last time because I have a concept,” she says. “I’m making this album for my ladies, oh, yes, and it is strong.”

“All of the producers I’ve been working with get the concept so much that they brought in a little more aggressive — and sometimes masculine — approach, but there is a really incredible top line,” she continues. “I want to tell women how incredible we are [and] how our intuition is so spot-on. Sometimes we don’t listen to it, but it is the thing that can actually make us happier.”

Is she worried that she might alienate her male fans with her new motivational direction. “I know that men will buy it,” she attests. “Y’all will definitely buy it and sing to it. You’ll say, ‘I can’t believe I’m singing to this!’ If you want to learn about women, listen to my next album!”

Of course, fans are still wondering if Rowland, Beyonce and Michelle Williams will ever reunite for a Destiny’s Child album. It’s been eight years since we last heard the trio in action. Although Rowland didn’t confirm a reunion would happen anytime soon, she’s still very proud of the legacy that DC has left behind so far.

“Destiny’s Child was a huge part of my career, and I think it’s only natural for people to refer to Destiny’s Child when referring to any of us,” she tells the mag. “For people to call us one of the greatest female groups of all time — are you kidding me? Beyonce and Michelle are two incredible women and deeper than what the public sees. Destiny’s Child, to me, was a sisterhood and a kinship that the three of us shared. You want people to respect that you have your own identity as an artist, but they also remember how they met you.”

Peep the photos below of Kelly Rowland’s glamorous photo shoot with Vegas magazine. 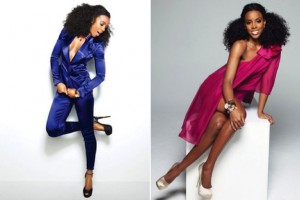