KANYE WEST & JAY-Z ‘NO CHURCH IN THE WILD’ VIDEO 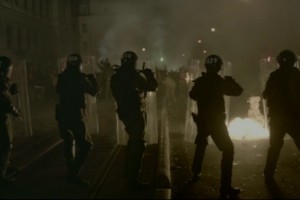 Kanye West and Jay-Z dropped a rather intense video for ‘No Church in the Wild.’ Neither member of the Throne appears in the clip, which features a series of violent protests and revolts.

The video opens with a sinister man preparing a Molotov cocktail, which he hurls at shielded and armored police officers who are struggling to keep a riot as small as possible. In the beginning, there is a clear division between the two sides, as the rioters and cops simply face and taunt one another — but then the battle begins.

Protestors dropkick officers’ shields in almost ‘Matrix’-style movements, breaking the invisible barrier and crossing the proverbial line. The violence breeds more violence, as the police then up the ante themselves, beating individual protestors from their own safe spots on horses, launching bombs, and macing them into submission. It’s simultaneously a thrilling and heartwrenching visual, as even religious and iconic statues cover their eyes from the fracas below them.

The violence continues to escalate as the song goes on, with protestors gaining some temporary advantage as they flip cars and destroy storefronts, but they’re soon quashed by more police violence. No one has a clear upper hand in the video, not even at its dramatic albiet anti-climactic conclusion. The motif is a mix of Occupy Wall Street, the London riots, and perhaps a bit of Shakespeare’s adage that “Evil begets itself.”