KANDI IS SUING KIM ZOLCIAK OVER “TARDY FOR THE PARTY” 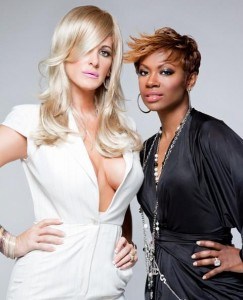 More than three years after the song “Tardy for the Party” became an unlikely novelty dance hit for former “Real Housewives of Atlanta” cast member Kim Zolciak, producer and current RHOA cast member Kandi Burruss is suing Zolciak for not compensating her properly for her work.
In the lawsuit filed Tuesday in the United States District Court of the Northern District of Georgia, Burruss and co-writer Rodney Richards are seeking “damages for copyright infringement due to Defendants’ unauthorized and unlawful licensing, distribution and sale of Plaintiffs’ creative works, namely a sound recording embodying a performance of a musical composition entitled ‘Tardy for the Party. ‘ ”
The song, in which Zolciak’s daughter Brielle gets songwriting credit, sold 102,000 copies, the lawsuit said.

I really wanted to add the song to this post but I JUST stopped my ears from bleeding.