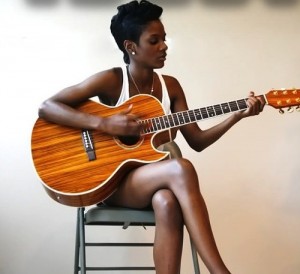 Rising star, singer Tiara Thomas, best known for her duet with Wale on the hit single “Bad”, shares her story on how she met the Maybach Music rapper one night in Atlanta that forever changed her life. The Indianapolis native traded contact information with Wale and record label, the Board Administration, and sent some YouTube clips so they could get an idea of her sound.

“I was in Atlanta with one of my friends I went to school with; she was my manager at the time. She’s like,’Hey, let’s go to Atlanta for spring break, just to go somewhere,’ Thomas recalls. We went and I had a fake ID. I was under 21 at the time and we just wanted to go to the club. So we went to the club and Wale was there. It was like, ‘Hey, there’s Wale, let’s take a picture with him.’ Wale listened to it, and he really liked it”

How “BAD” was created:

“There was this rap song called ‘Some Cut’ by Trillville. It used to be one of my favorite songs when I was younger. It’s really vulgar. I wanted to find a way to cover the song and make it sound pretty,” she says. “I started singing the words and then I just freestyled and started singing. I was like, ‘Dang, that’s tight!”“I remember he texted me when he finished the first verse, he was like, ‘Yo I just finished my first verse, is it dope?’ He put his verses on and took the song to a whole new level. He made a story out of it. It’s like a girl anthem and that’s what I like so much about it. You wouldn’t think that he would do that — a rapper puts out a girl anthem. But it’s true and it’s real. I think that’s why people connect with it.”

A guitarist and songwriter in her own right, Thomas says she is not limiting her sound to just R&B. Her album Sallie Mae is expected out later this year. When discussing her sound she states:

“I do write a lot of R&B music (but) I think it exceeds beyond urban. It could crossover into pop. I’m just excited for people to be able to hear the sound. It’s a fresh sound; it’s not strictly R&B music”

I am definitely feeling Tiara’s sound and her style. I look forward to hearing more music from her.

Wale’s album The Gifted is set for release on June 25th.

Watch the official video for “BAD” below.