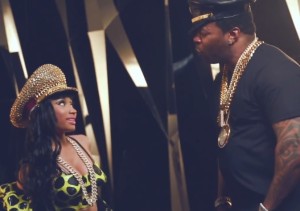 Nicki Minaj gets to twerk for real in Busta Rhymes‘ video for the ‘#Twerkit’ remix. In a behind-the-scenes clip, we watch as Minaj records her verse and then shoots the video the following day.

“I didn’t know this was a real video,” Minaj tells director X, as she prepares for makeup and wardrobe. The look on Mr. X’s face when Minaj shows him how she’s going to twerk her booty is priceless.

The Queen Barb decides to wear a studded captain’s hat, skin-tight denim pants and a big dookie gold necklace for the shoot. And right on cue, the Young Money star twerks her booty flawlessly for the camera.

Later, she films scenes with Bussa Buss and his partner-in-rhyme DJ Khaled, who had the crew laughing earlier with his fake Jamaican patois.

Pharrell Williams, who produced the dancehall-inspired track, stopped by the set as well to give props to Minaj for killing her verse. He’s so happy with the remix he jokingly mimics Busta Rhymes’ gruff rhyme flow.