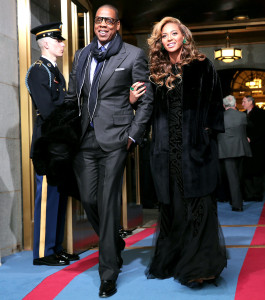 This shouldn’t be a shocker. Jay Z and Beyonce have been crowned the highest-earning celebrity couple byForbes magazine. According to the business publication, Jayonce earned $95 million from June 2012 to June 2013. Now that’s a lot of cheddar.

The powerhouse couple’s salaries come from their touring, album sales and corporate partnerships.

Hov toured extensively behind the release of ‘Watch the Throne’ and

pocketed $1.4 million per night. Meanwhile, Queen Bey came back and conquered the stage with her Mrs. Carter Show World Tour, raking in $2 million a night. You go girl!

But let’s not forget about the endorsement deals. Beyonce’s branding partnership with Pepsi earned her $50 Million. Furthermore, the R&B superstar is getting paper from her fragrance collection and her clothing line, House of Deron.

Of course, Jay Z made a killing with his innovative deal with tech company Samsung, which bought 1 million copies of his album, ‘Magna Carta Holy Grail,’ at $5 apiece. Also, his stake in the Brooklyn Nets was profitable but he must now relinquish all assets with the organization since he started his own sports agency,Roc Nation Sports.