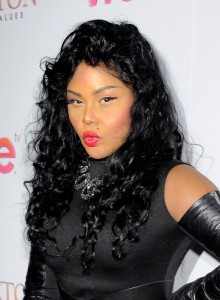 Lil’ Kim has been accused of stealing a picture of one of Reddit’s popular make-up artists and using it for commercial purposes. The Canadian female named Samantha Ravndahl claimed that the raptress used the picture as the cover art for her latest release.

The whole problem began after Ravndahl posted a creepy picture of herself in make-up depicting a skull with green and decaying skin. She wasn’t happy when she found out that the image appeared in Kim’s “Dead Gal Walking” a.k.a. “Hardcore 2K13” mixtape as well as in her social media accounts with a copyright logo added to it.

“Lil’ Kim took my photo and is using it as album art (might I add she took the liberty of adding her watermark over it on instagram),” Ravndahl posted her complaint on Reddit. She has already tried to contact Kim’s people and asked for financial settlement.