50 CENT GETS LICENSE TO PROMOTE BOXING 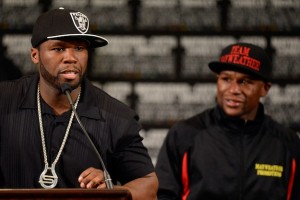 50 Cent can add a new occupation to his expansive resume — boxing promoter. 50 is now a licensed boxing promoter in New York, according to Sports Illustrated. Fiddy is no stranger to the boxing ring since his best friend is boxing champion Floyd Mayweather, Jr.

The rapper has established a company called TMT Promotions (aka: “The Money Team”) and is in the process of acquiring a license in Nevada, too. Boxing insiders have told SI.com that 50 is looking to promote fights for featherweight boxer Yuri Gamboa and Andre Dirrell, a super middleweight contender.

Last April, Mayweather hinted to SI.com that 50 is planning to enter the world of boxing. “I think he’s going to be involved on the promotion side,” he said. “We may even put him out there, let him fight on pay-per-view one time. So we don’t really know what the future holds, but he is getting involved with boxing.”

It’s good to see Fif expand his portfolio outside of music. From energy drinks to headphones, when it comes to business, 50 is the champ.

In the meantime, 50 Cent is expected to release his new single ‘New Day‘ featuring Alicia Keys and Dr. Dre on Tuesday (July 24).