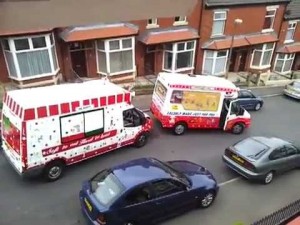 Manny Pacquiao and Timothy Bradley may have fought the weekend’s most visible battle, but in the UK, another one was taking place — between two ice cream truck drivers who’ve been engaged in a long battle for turf supremacy.

The drivers have names, but it’s a lot more amusing to just call them what the neighborhood kids do: Mr. Whippy and Mr. Yummy. Seems their trucks were parked near each other, and as the children approached one, the other would call out and offer more ice cream for less money.

The two men then got into an expletive-filled argument that resulted in Mr. Yummy grabbing a metal bar and shattering Mr. Whippy’s window. Mr. Whippy then responded in kind by ramming Mr. Yummy’s van with his own. It’s like ‘West Side Story’ with ice cream!

A resident taped the throw-down, and police are now investigating complaints filed by both drivers against each other, with Mr. Whippy saying, “Over the last few months, this Mr Yummy has been following me around … muscling in on my patch.”

But Mr. Yummy rebutted, “Surely the town is big enough for us both … I didn’t mean to smash his window. I just tapped it too hard.”