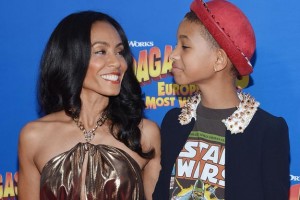 Like mother, like daughter? That may soon be the career case for 11-year-old pop phenom Willow and her mother, actress Jada Pinkett Smith.

Hair whippin’ Willow may coax her mom out of musical retirement, as Pinkett Smith revealed that she plans to hit the studio to collaborate with her daughter on a rock track. As you may or may not know, Pinkett Smith fronted her very own hard rock band Wicked Wisdom, which even appeared on the famed Ozzfest summer trek back in 2005. The band has been inactive for quite some time, though.

While Willow made a splash on the pop scene with ‘Whip My Hair,’ she shares her mother’s adoration of rock music and the duo would go that route. Pinkett Smith continued, “She really loves rock music, so she wants to come on and get crazy with me on a track. Which I would love, because she has a fantastic voice.”

The collabo between mama and her baby girl may have to wait a bit, as Pinkett Smith confirmed that both of her offspring are hitting the road for tour this summer. She said, “[Willow has] new music that’s coming out this summer and she’ll be jumping back on tour. So you can expect some new tracks coming from Willow and Jaden. And I think they’re doing a tour this summer as well.”

It’ll be worth the wait to hear what Jada and Willow can do and how they connect on record. Perhaps dad can drop a few rhymes into the mix, to really shake things up?