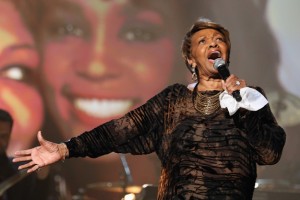 The icon Whitney Houston was given a beautiful tribute at the 2012 BET Awards on Sunday (July 1) that was both elegiac and celebratory.

Mariah Carey entered the stage first in a glittering pink gown. The R&B songbird offered a quick anecdotal story of how she first met Whitney Houston and how everyone was worried about the two divas standing in the room together since there was a supposed rivalry between the two. Midway through her story, Mimi briefly became teary-eyed as she called Houston her “friend.” “We will always have the music. We will always have Whitney,” she said.

Afterward, Monica turned the BET Awards into church with a rendition of Houston’s favorite song ‘I Love the Lord’ (from ‘The Preacher’s Wife’ soundtrack). Her soaring vocals ripped through the venue as audience members felt the spiritual side of the late veteran singer. Brandy was next to perform and got the crowd hyped with a rousing performance of ‘I’ll Be Your Baby Tonight’ and Whitney’s 1987 hit ‘I Wanna Dance With Somebody (Who Loves Me).’

Then the matriarch of the Houston family, Cissy Houston, performed ‘Bridge Over Troubled Water’ in front of a large image of her and her late daughter singing together. The gospel icon gave an incredibly emotional performance that moved the audience into tears, including Beyonce. Cissy Houston’s glorious performance was a huge reminder of from exactly where Whitney got her famous voice and her enduring legacy.

Finally, the tribute ended with Chaka Khan singing ‘I’m Every Woman,’ a song that Whitney made into a chart-topping hit in 1993. Behind an orchestra and several background singers, a red-haired Khan gave a celebratory performance that had the whole audience — men and women — on their feet cheering, “I’m every woman.”

The Whitney Houston tribute was a major standout at the BET Awards. Bravo, BET!