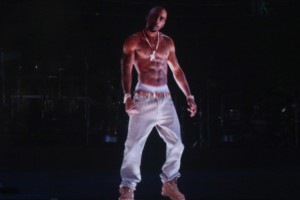 Tupac Shakur may be gone, but he’s still winning awards. Actually, his hologram won the prestigious Titanium and Integrated Lions Award at the Cannes Lions International Festival of Creativity. The event, which is a neighboring awards ceremony to the Cannes Film Festival, honors achievements in advertising/digital production.

Production company Digital Domain, who created the 2Pac Hologram (actually it’s a 2D image), was saluted for their creativity, as well as Dr. Dre who came up with the idea. “When Dr. Dre came to us with his vision we knew that the world had never seen anything like this and that the response was going to be huge,” said Ed Ulbrich, CCO of Digital Domain in a press release. “Having ‘virtual 2Pac’ and the idea of virtual performers recognized with a Cannes Lion Titanium Award is beyond exciting.”

The virtual 2Pac beat out over 500 contenders for the illustrious prize from such brands as Nike, American Express, Target and many others.

As previously reported, the virtual 2Pac’s performance stunned audiences both online and at the 2012 Coachella Festival back in April. Not only did it leave people in shock and awe, it also scared a couple of rappers who witnessed it first-hand onstage. “I don’t know, it kinda freaked me out,” said Wiz Khalifa.

Since making its appearance at Coachella, the Tupac image help bolster sales of the late rapper’s posthumous albums.