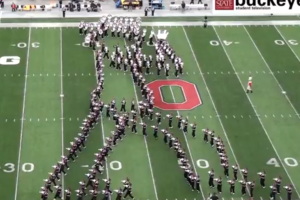 Michael Jackson was the King of Pop; Ohio State University’s marching band is the king of in-formation moves. So when the two collided over the weekend, the video of OSU’s performance quickly went viral.

It’s official! Timbaland is working on a posthumous Michael Jackson album. According to the veteran hitmaker, the secret project promises to be the one that will complete his producing legacy. In an exclusive Revolt TV interview, Timbo reveals that he was approached by Epic Records honcho L.A. Reid to rework MJ’s previously-unreleased material for the album. “L.A. Reid came to my house and […]