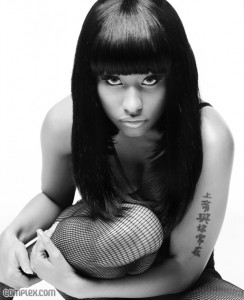 Nicki Minaj says she feels like her latest LP is a return to her rap roots and that she’s been unfairly labeled as a one dimensional artist.

Nicki Minaj has come under fire from critics and listeners alike for her recent transformation into a more pop-oriented rap artist than a lyrically-minded emcee. Now, in an interview with Sway Calloway, the YMCMB starlet addressed her critics and discussed what she feels is her return to rhyming.

According to Minaj, she feels that the majority of listeners have pegged her as a one dimensional artist focused solely on dominating the pop world. She says that while she’s faced these criticisms from the beginning of her career, her ascent to mainstream Hip Hop further typified her as a pop artist.

“I think I went from being a caricature in peoples’ eyes to becoming someone with a lot of layers,” she explained. “You just got to realize that I’m never going to be one dimensional, and even my core fans I think at one time thought I was one dimensional when I was doing the mixtapes. However, even on the mixtapes, I was singing and I was doing songs like…’Can Anybody Hear Me’…where I was singing and I was talking about being a female rapper and trying to get signed and what we go through…I was telling those stories on my mixtapes. I feel when the mainstream got a hold of Nicki Minaj, they turned her into a girl that wears wigs and has funny voices. Then we had to get past that, and I then had to reel it in and say, ‘Actually, I’m a business woman.'”

Nicki also added that at this point in her career, she feels that she has enough clout in the industry to focus on the brand of Hip Hop that she wants to make. She pointed to her recently released sophomore album Pink Friday: Roman Reloaded as evidence that she’s returned to rhyming, saying the album’s guest features from Cam’ron, 2 Chainz and Nas are signs that she has her Hip Hop peers’ respect.

“[The evolution of my career has] just been peeling back the layers and now, it’s like the ultimate layer was me saying, ‘Now I’m going to do whatever kind of music that I want to do’…[it’s] not always going to entail a hard Hip Hop beat, but sometimes it is,” she explained. “A lot of the tracks on [Pink Friday: Roman Reloaded] are a hard Hip Hop beat and just spitting, and that’s why I’ve been [working with] some people like Cam, 2 Chainz and the legendary Nas. I got those people because…I wanted to get back to [just rapping]. I wanted to remember what it felt like when I just wanted to show people that I could rap.”

Check out the full interview below.