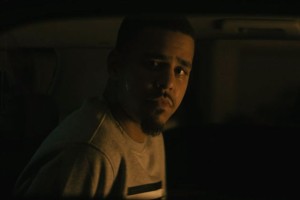 J. Cole‘s inspiring track ‘Crooked Smile’ is the second single off his chart-topping ‘Born Sinner’ album and it’s notable for its overwhelmingly positive overtones. However, the video doesn’t relay the same bright message.

The clip — directed by Sheldon Candis – follows J. Cole as he plays a drug dealer who cleans his Jordans, mows his lawn and readies up the barbecue grill, which are typical activities in “Anywhere in America.” It turns out he’s getting ready to happily celebrate his daughter’s birthday.

Elsewhere, a DEA agent says goodbye to his daughter before embarking on a raid. The criminal: J. Cole. As his family sleeps, the raid occurs and Cole is arrested. His daughter wake up and looks on from her bedroom, and without giving too much away, what happens next is chilling and tragic. Saying it’s a sharp contrast to the song’s tone is an understatement.

The visual ends with the message, “For Aiyana Stanley-Jones and please consider your war on drugs.”

Stanley-Jones was an innocent 7-year-old girl who was shot during a police raid in Detroit in 2010.