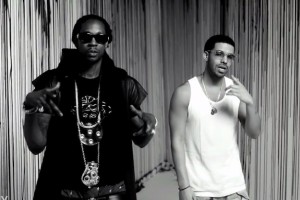 2 Chainz has finally released his video for the street banger ‘No Lie’ featuring Drake. The black-and-white clip, which was helmed by director X, boasts some interesting visuals but some of it will probably leave you scratching your head.

In the video, 2 Chainz is dressed in all-black and wearing a pilot’s hat as he spits his braggadocios lyrics in a white room, with black paint dripping slowly down the walls. Meanwhile, Drake is dressed in all-white as he smokes a hookah while a bodacious model dances beside him.

Elsewhere, there are shots of women in masks profiling for the camera and taking lie detectors tests. Why? Who knows? There’s also a random guy on a skateboard doing tricks. Why? Who knows?

Outside of that, it’s your basic, albeit artsy, rap performance video featuring two of the hottest rhyme-spitters in the game. What more do you want? A concept, maybe, but we digress.