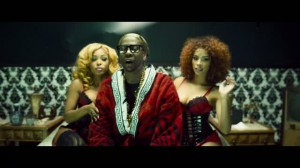 2 Chainz is living a good life as shown in a music video for his latest offering “Crack”. The Playaz Circle rapper flashes his bling as he raps in a warehouse. At one point, he just sits back wearing a Versace robe and enjoying the company of two buxom scantily-clad ladies.

The song is taken off the rapper’s first solo album “Based on a T.R.U. Story” which earned him a No. 1 debut on Billboard Hot 200 and a Grammy nomination for Best Rap Album. He additionally scored two Grammy nods for Best Rap Song and Best Rap Performance for his collaboration with Kanye West in “Mercy”. He follows up those achievements by landing at No. 2 on MTV’s “Hottest MCs in the Game” list.

For his next studio installment, the rhymer sets his eyes on something bigger and is determined to outdo himself. “Next album will hush all the critics that the 1st album didn’t,” he tweeted. No date has been set up for his sophomore effort.