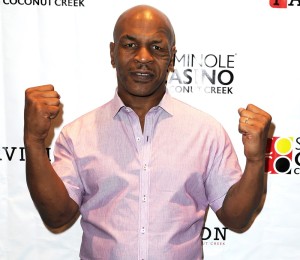 “I really like and admire that little guy, but what he really needs to understand is that eventually, if you keep doing that stuff, people will turn on you. I’m just worried about him because he’s really a sweet kid,” Mike Tyson said. “He’s probably going through some overbearing pressures and if he keeps getting violent cases, he was arrested for this, assault here, assault there, they’re going to put him somewhere where that’s all they do is assault people. That’s what they do all day.”

Tyson was asked about what he would tell Chris Brown if he had the chance to speak with the singer-rapper.

“Man, you got to get it together,” Tyson said. “I can’t even believe I’m saying this because I’m trying to work on getting it together…This is what I know. Chris should know this. If you’re not humble in this world, this world will thrust humbleness upon you. That’s just what’s gonna happen.”