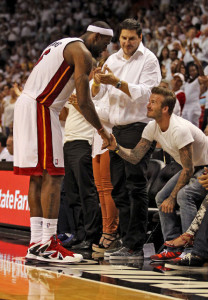 Superstar athletes unite! ESPN has reported that King James and soccer icon David Beckham are in the early stages of possibly bringing a major league soccer team to South Florida.

Many weren’t aware that James has an ownership stake with Liverpool (English Premier League) and he has always followed the sport closely during the NBA offseason.

“There’s some interest in both sides,” James said Monday of his talks with Beckham, who has attended several Miami Heat games in recent seasons. “David has become a good friend of mine over the last few years, and I think it would be great for this city to have a football club for sure.”The MLS had a franchise in South Florida from 1998-2001, but the Fusion folded after playing in Ft. Lauderdale. James insisted Monday that the discussions are preliminary and haven’t advanced past the “some open dialogues.””The research is still being made out, but I think it can be huge,” said James, a four-time league MVP and two-time champion. “But you never know. I think this is a great town for soccer. There are a lot of soccer players here. There is a lot of great youth soccer here.”