Headshots of the eight-member crew are featured in the form of a cross with the tag line, “In G.O.O.D. We Trust.” The cover goes together well with the group’s religious-themed singles, ‘Exodus 23:1′ and ‘Mercy.’ It also worth mentioning that 2 Chainz is part of the group although he hasn’t formally announced that he’s a G.O.O.D. member. No problem, it’s all good to us. Ha!

In the cover story, the G.O.O.D. Music team sit in a round-table discussion to talk about their illustrious selves. Only West is absent from the conversation, who is still maintaining his “no press” policy. Bummer.

Among the things the group discusses:

On What G.O.O.D. Music Means to Them:
Big Sean: “Quality — the best. Kanye put himself in a class that nobody can match, as far as evolving, progressing, and taking the best of what we learn and making more out of it. So the brand is just being the coolest. We dress the best, we rap the best, we sing the best, we look the best. [All laugh] It’s about getting the money, but it’s also about changing the world and doing what the f— we want to do.”

Kid Cudi: “With all due respect to what these guys said, I think we’re missing the main point, which is that we represent honesty, in all aspects. Ain’t nobody fake. Ain’t nobody phony. N—as are who they are. Everybody is who they are around each other. We’re real. I’m not in other crews. I don’t know how other n—as live, but I know right here that’s one of the main things we represent: honesty and realness. You can just hear it in the music. This ain’t no cookie-cutter s—.”

The Pressure to Drop a Classic-Worthy Album:
Q-Tip: “I don’t feel like that because, like you said, he understands what the talent is — it’s on par with his. One thing that we all have in common, Kanye included, is that we all want to be great. We all have that drive. Kanye channels it—he’s the nucleus. But at the same time, it’s collaborative. He’s open to whatever it is. If there’s pressure, it’s just to do outstanding s—. And that’s more of a drive than a pressure.”

2 Chainz’s Alliance With G.O.O.D. Music:
2 Chainz: “I’m not officially signed, paperwork-wise, to G.O.O.D. Music. But I have a great rapport with ’Ye. He called me before Watch the Throne came out. I’m an only child. I’ve got trust issues. So I don’t have a best friend, a brother, sister — nothing. Stuff was happening in my life that I couldn’t tell nobody. I didn’t have anybody in my life that I could tell, like, ‘’Ye just called me.’” 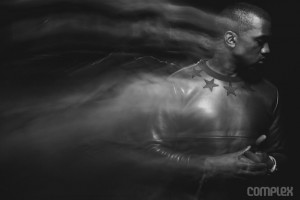 On the Brilliance of Kanye West:
Q-Tip: “You know what’s the cool thing about Kanye? Once n—as get to that No. 1 spot, they play it safe. They’ll put out joints that just fit it right, and they’ll get the right motherf—er to sing it. ’Ye don’t give a f—. He’s trying to change that whole shit. It’s brave, and more n—as need to follow that example.”

John Legend: “He’s always pushing himself. That’s always been part of his core. That’s what makes him try new things with each album. He’s already been where he was, and he’s ready to move. He’s consistent in the fact that he’s willing to change. He’s willing to push himself and go beyond what he did in the past.”

Although the G.O.O.D. Music compilation is called ‘Cruel Summer,’ it looks as if it will be out in the fall. Yeezy has rescheduled the release date of the compilation to Sept. 7, which, technically, is still summer.

In the meantime, you can check out Kanye and the G.O.O.D. Music team in the Aug./Sept. 2012 issue of Complex magazine when it hits newsstands on Aug. 7. 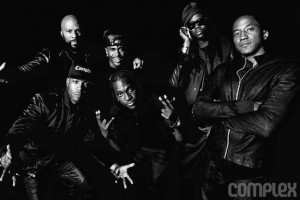