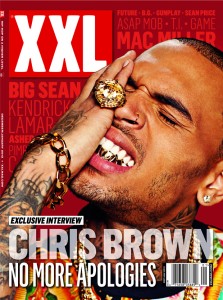 Chris Brown talks about almost everything in his recent interview. The “Don’t Judge Me” singer talks about how he’s not a “Player” when it comes to his love life, and the infamous twitter “Fookery” with comedian Jenny Johnson…..

In excerpts released from a cover story interview in the December/January issue of XXL magazine, the singer touched on a number of hot topics, from yet another denial of a romantic relationship with ex-girlfriend Rihanna, to his beef with Drake (allegedly over Rihanna) and his sometimes impulsive social media past. “One thing people often want me to talk about is my public love life,” he said in what is touted as his first major interview in two years. “When it comes to my love life, the perception seems as though I am a player. But that’s not true … Love is something I am still learning. It’s just an obstacle that I haven’t yet mastered. I think that’s my biggest hurdle in life.”
Though he admits to being too quick to hit “send” in the past in the XXLstory.
“I haven’t been as mature and thought out in the past, so, me growing now, it’s showing my progression,” said Brown of his difficulty in the past with keeping his cool  on social media. “I used to use my Twitter account to vent, but now I mostly use it for marketing and promotions. Even if the media asks me something, if it’s cool then it’s, ‘What’s up?’ But if it’s anything that’s too negative, I don’t care to respond.”