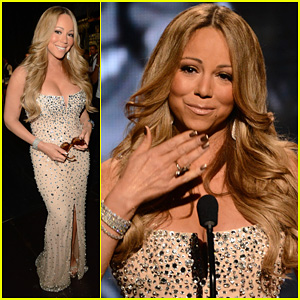 Mariah Carey is set to rake in big bucks on ‘American Idol.’ Exactly how big?

The website also notes that ‘X Factor’ judge L.A. Reid actually urged Carey to take the gig. The duo hung out in the Hamptons over the weekend, as they’re longtime pals from when Carey first hit the music scene — Reid was the CEO of her record label.

Unfortunately, not everyone thinks Carey’s paychecks are money well spent from the ‘Idol’ set. A source told TMZ that Carey was a “nightmare to work with” during her stint as a guest mentor on the show in 2008. Carey was reportedly late to film at the Beverly Hills Hotel, nitpicked over minute details and generally “was not very nice at all.”

Still, we think Mimi is going to be an awesome judge, and we’re not alone. ‘Idol’ alum Haley Reinhart told MTV, “She knows what it’s all about. She’s got the golden voice. I think that out of a lot of different people, she would be the diva to stand there and be able to give people real advice, real criticism.” Amen, sister!

Black Eyed Peas frontman and ‘The Voice U.K.’ judge will.i.am agrees. “She’s fresh,” will.i.am said. “I like her.” Hopefully viewers do too!