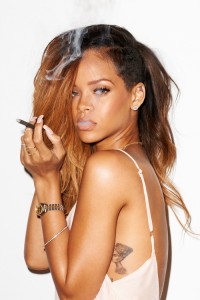 Ten of Rihanna’s tour buses were stopped at the Ambassador Bridge and searched for marijuana. Rihanna wasn’t on any of the buses traveling.

Law officers stopped the singer’s tour buses at the border between Michigan and Canada, according to TMZ. After smelling marijuana on one of the buses, the officers continued to inspect each bus ultimately finding a passenger possessing a “small amount” of weed. The male passenger was cited with a civil penalty

Rihanna has never shied away of publicly showing her like for weed. She’s posted photos of herself smoking on her Instagram account and was spotted using her bodyguard’s head to roll a blunt while at last year’s Coachella festival. “I’m crazy, and I don’t pretend to be anything else,” Rihanna tweeted after a photo of her rolling sparked controversy.

The singer is currently on her “Diamonds World Tour’ with A$AP Rocky. She performed at the Air Canada Centre in Toronto yesterday (March 19) and will perform in Detroit tomorrow night