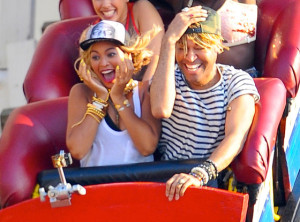 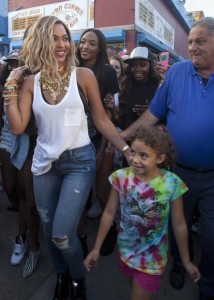 The Coney Island theme park in New York City got a mega celebrity visitor on Thursday afternoon, August 29 in the person of pop/R’n’B diva Beyonce Knowles. The Queen Bey was there to film a new music video reportedly helmed by famed fashion photographer Terry Richardson for her new song entitled “XO”.

Wearing a Notorious B.I.G. cap and multiple neck bling over a white sleeveless shirt over a black bra top and matching them with a pair of jeans, Bey rode the 86-yrear-old Cyclone roller coaster flashing a smile in one snapshot and then enjoying the thrilling ride with her seatmate, her stylist Ty Hunter and the other passengers in the other pics. The filming took just 45 minutes to complete.
As expected, fans crowded the amusement park to catch a glimpse of the “Grown Woman” singer. She graciously smiled and waved to the fans who screamed at the top of their lungs to catch her attention. “This is the craziest and best thing I’ve seen in my whole life. I came out to Coney Island for the day. It was a lucky day,” said one of the fans who saw Beyonce that day.

Come Saturday, Beyonce will kick off the two-day Budweiser “Made in America” music festival, co-headlining with the Nine Inch Nails. The event will take place this weekend at the Benjamin Franklin Parkway in Philadelphia. Like in its inaugural run last year, her hubby Jay-Z will serve as the event curator, but unlike last time, he will not perform this year.