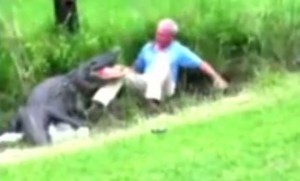 An off-duty scientist thought he’d lend a helping hand when an alligator was spotted along Highway 70 in North Carolina.

But Fred Boyce bit off more than he could chew; as he approached the beast, the alligator viciously attacked him, nearly ripping off his arm.

Mr Boyce was rushed to the hospital to be treated and officials from the North Carolina Wildlife Resources Commission were able wrangle the beast and return him to the wild.

A motorist first saw the 10-foot alligator crossing the thoroughfare at about5:30pm Tuesday.

Wildlife officials were called in from Kinston, roughly two hours away, but Mr Boyce didn’t wait till they got there.

Mr Boyce, a herpetologist at the nearby Pine Knoll Shores Aquarium, is an expert on amphibians and reptiles.

He’s been on staff at the aquarium since March of this year and his Facebook page includes several photos of him participating in gator ’round-ups’ and handling other dangerous creatures.

In the video, he throws a towel over the animal’s head to block its vision. He approaches it slowly from behind, placing one leg on either side of it and leans down.

The animal whips around and latches onto his arm, toppling him over as it began its attack.

Mr Boyce kicked at its snapping jaw and coolly backed away.

The injured scientist was taken to Carteret General Hospital, according to a statement by the aquarium.

‘He is recovering,’ said spokesman Julie Powers to the Mail Online. ‘He was treated and released.’

A team from the North Carolina Wildlife Resource Commission arrived to secure the alligator.

‘That gator was in a position of advantage there in that ditch. We had to coax him, get him to move somewhere flat where we could have the advantage,’ biologist Robbie Norville told.

‘We were able to tie him up, secure his jaw closed. From there, it all went well.’

Local EMS, police officials and even the fire department were called in to help keep the creature at bay.

After the ordeal, the animal was taken to a swamp in Carteret County Tuesday night and released back into the wild.

Mr Norville said that before Mr Boyce’s bite, there had only been three recorded bites of an alligator in North Carolina history.

He added that only certified people, like Mr Norville, are legally allowed to handle alligators in the wild.